When I originally decided to do an internship with MCP I had no idea what my project would be about. I communicated (a LOT!) with Ashley Carreiro, one of the staff members at MCP, brainstorming ideas and trying to decide on a specific research aim. I think invertebrates are incredibly cool and I find it very easy to learn local fish, and of course turtles are amazing and who WOULDN’T want to work with them, right!? But to be honest, it didn’t take too much deliberation to decide that I wanted to do something with corals.

I’ve only been a diver for about 5 years but I fell in love with it instantly – doing about 450 dives just in my first year. As far as I’m concerned, there really is no such thing as a “bad” dive and I always find things to be amazed at. But I felt like learning “substrates” (basically, everything that doesn’t move around!) would give me a greater appreciation for the underwater world- and I have never been more right about anything in my life. It’s probably how people felt when the first movie was made in color. Except it’s more like I had been seeing in black and white until now.

At the time of all this deliberation I was on Koh Lanta, Thailand, visiting some of my favorite people in the world. Right around the time that I decided I wanted to work with corals, it came to my attention that Ocean Quest Global was running a free workshop on coral propagation through one of the local dive shops. I still hadn’t decided exactly what I wanted to do at MCP and the timing felt incredibly serendipitous. I decided to attend the free workshop and then ended up doing a subsequent 4-day training on the methods I learned in the workshop. 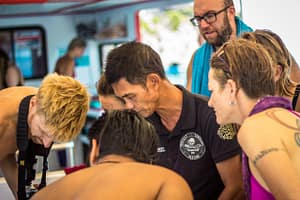 Learning about corals in propagation workshop at Koh Haa, Thailand.

Of course all of this was peppered with copious emailing back and forth with Ashley- more brainstorming! MCP had tried a couple of different coral nursery projects, with varying degrees of success, and it was a relief to learn that coral propagation was an area of interest for MCP.

There are countless artificial reef / coral propagation projects out there but most of them use artificial substrates- rebar, concrete, PVC, tires- you name it, people have probably put it in the ocean and tried to grow coral on it. Obviously all of these systems share the overwhelming negative effect of contributing to marine debris if the project is abandoned. Besides that, many leech toxic chemicals or they are incredibly expensive to set-up and maintain. Not to mention that they’re usually just unsightly!

Ocean Quest’s system uses only natural rocks collected in the same environment as the corals used for propagation- most of which are fragments that have been broken by anchors or careless divers and are unlikely to survive because they are so small that they are at risk of being buried in the sand or being rolled about by wave action. Corals can’t survive unless they are stationary so these types of fragments are perfect for my project! 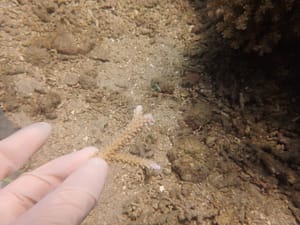 A “coral of opportunity” – a small fragment that will likely die without intervention.

These fragments are cut into tiny pieces and super-glued onto rocks, then bathed with a specially formulated catalyst that Anuar Abdullah- founder of Ocean Quest- designed after over a decade of research in coral propagation. The catalyst helps the super-glue harden, has antiseptic qualities which protect the coral from infection, and also helps the super-glue to break down after a couple of weeks. At this point the coral has had a chance to attach to the rock on its own.

I arrived full of enthusiasm for my project! I messaged Anuar and told him how excited everyone was about doing coral propagation here and he said he would get some catalyst sent out to me. I started scoping out sites and making preparations. A LOT of preparations. I won’t go into it all because it would be incredibly boring but suffice to say that there is a lot more preparation to do a project like this than you would think! We eventually decided not to put all of our eggs in one basket and, instead of picking just one location, chose to make several nurseries at three separate dive sites.

Nearly 6 weeks into my time here I was STILL waiting for my catalyst. I got in touch with Anuar to ask for the tracking number and he discovered that the lab had never sent it! To make matters worse, everyone was in the field so no one was available to send it to me! He assured me he would send it on personally as soon as he could but that still meant my project was stalled for … who knows how long!? Everyone told me I could expect the post to be painfully slow. It was so frustrating- especially since I had skipped doing some dive courses I really wanted to do so I could make progress on my project, only to be stalled for an indefinite amount of time. I kept thinking how I could have flown through Malaysia on my way here from Thailand and picked up the catalyst in person- if I had only known!

One thing I constantly struggle with is being upset with a situation because things are not working out to my expectations. I know the path to me being a better human being requires me to learn this lesson (one of these days!) so I tried to let go of my expectations and just focus on the day to day things and accept the fact that there was nothing I could do except wait.

I spent a lot of time doing substrate surveys during that time and I found that really enjoyable. It’s really rewarding to know that you are collecting data that will help build a better picture of what is going on with the reef here. Also there is something incredibly satisfying about having a great buddy who you really communicate well with.

I also helped out with one of the other intern’s projects- another artificial reef idea utilizing reef-balls. This project was (and still is!) really interesting to me because it uses some of the same methods I had learned in the coral propagation trainings, but instead of placing coral fragments on natural rock we were wedging fragments into tiny holes in large (~1 meter x 1 meter) “fish condos” made from a specially formulated concrete which is pH balanced so it is not detrimental to marine life. 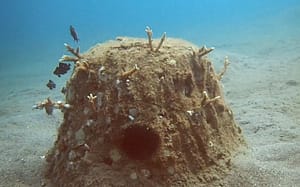 A “reef ball” with coral fragments plugged into small holes designed for this purpose.

Finally, my catalyst arrived! I was more than half-way through my time here but I have done my best to make the most of the time I had left and since then it has been very busy! There is a lot of organization and coordination involved in a day of propagation, and these things do not come easily for me! Luckily I have had a lot of help from staff members Ashley and Laura in terms of arranging boats, figuring out the scheduling and also with the propagation itself. I have made a lot of mistakes but I have learned from every one of them. The biggest lessons I have learned? You can never have too much super-glue! Also, do not go on the boat without dive snacks! You do not want your helpers to get hangry- it is not a pretty picture! 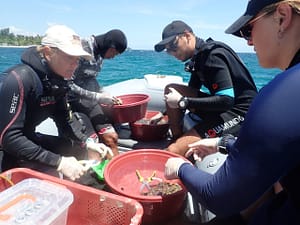 Coral propagation on the MCP boat!

I have less than two weeks left here and I still have so much I need to do. I could do more days of propagation on nearly every nursery, and one we have not even started yet. I have not been able to do any of the monitoring for prior propagations because not enough time has passed yet. Of course I have not seen any growth or any real indication that my project has been successful, because coral grows painfully slow. The fastest growing varieties might grow 10 or 15 cm in a year, and some might not even grow 1 cm in a year. I hate the idea of leaving here without having some idea of the success of my project!

I can not believe it has been almost four months. I remember deliberating over making such a time commitment nine months ago when I first got in touch with MCP and started talking about doing an internship here. At the time the idea of committing to 4 months seemed so daunting. That is a long time to be someplace you don’t want to be and to be honest, I worried that I would not like it here. When you are in such close proximity with so many people all the time, the attitude of the group is easily influenced by one or two individuals- sometimes in a negative manner! What’s that old saying? One bad apple spoils the bunch? Something like that! I worried that there would be a lot of very young people experiencing their first trip away from home, who would not contribute to the community and would set up a selfish “me first” mentality on camp. Overall I’d say the mix has been incredibly positive and most people really do want to do all they can to contribute. There are volunteers from 18 – 65, from all over the world and from all walks of life. The diversity of personalities is incredible and I have met some amazing individuals who I hope I’ll know for the rest of my life. Nearly everyone wants to be a part of something bigger than themselves, and that’s a truly beautiful thing.

So now I am faced with the same question that nearly every volunteer or intern asks themselves at some point during their time at MCP… Should I extend my stay!? 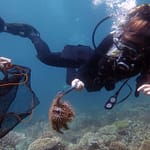 Crown of Thorn removal in AndulayConservation, Crown of thorns, Fieldwork